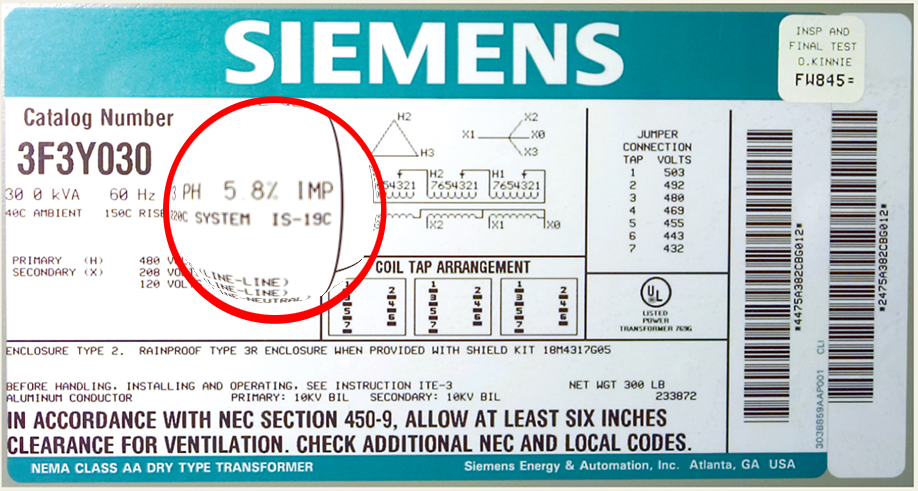 The impedance of a transformer can be calculated by measuring the voltage drop across a winding at full load and is expressed as a percentage of the rated voltage. In the above example, we would expect the voltage drop on the secondary at full load to be approximately 12 volts or 5.8% of 208 volts and the voltage drop across the primary to be nearly 28 volts or 5.8% of the primary voltage.  It may be easier to think of the transformer as a source with an impedance connected in series. The voltage divides between the source impedance and the load as shown in the following illustration:

The source impedance is the sum of the winding resistance and leakage reactance and is expressed as a percentage of the rated voltage. This will also be the voltage that must be applied to a shorted transformer in order to circulate full-load current.

The impedance is measured by means of a short circuit test, as shown below.  A voltmeter is placed across the primary winding and the secondary winding is shorted. A voltage at the transformer’s rated frequency is applied to the primary winding using a variable transformer. Applied voltage is increased until the rated full load current flows through the shorted winding (measured with an ammeter). The percentage impedance can then be calculated with the following formula:

The Effect of System Impedance

The impedance of a transformer has a major effect on available system fault levels.  It determines the maximum value of current that will flow under fault conditions. It is also the most common cause of voltage drop when the load is increased.

It is easy to calculate the maximum current that a transformer can deliver under symmetrical fault conditions.  By way of example, consider a 20 kVA transformer with an impedance of 5% and a secondary voltage of 480v.  The maximum fault level available on the secondary side is:

From this figure the available fault currents can be calculated as follows:

Obviously, a transformer with a lower impedance will have higher available fault currents and vice versa. These calculations only deal with phase to phase faults (symmetrical faults).  Non-symmetrical faults (phase-earth, phase-phase etc) require more complex calculations and are beyond the scope of this article.