Though Steinmetz has been largely over-shadowed by Edison and Tesla, his contributions to electrical theory and distribution are at least as significant as the contributions of his contemporaries. His published works cover a broad spectrum of electrical theory, including AC Hysteresis Theory, AC Steady-State Circuit Theory, and AC Transient Theory. More than just a theoretician, Steinmetz was awarded numerous patents, including Three-phase Induction Meter, Induction Dynamo, an Induction Furnace, and the world’s first 3-phase AC generator. 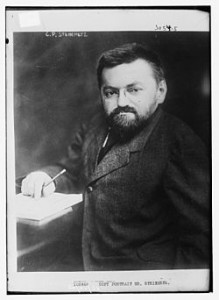 at Ellis Island because of his physical deformity and because he spoke only rudimentary English. He was allowed to enter when his friend, Oscar Asmussen, vouched for him, claiming he was rich and a mathematical genius (the second part, at least, was true).

A letter of introduction to Rudolph Eickenmeyer helped secure a job for Steinmetz at the Osterheld and Eickenmeyer Company in Yonkers, who manufactured, among other things, a patented hat-making machine.  The company had interest in manufacturing electrical equipment and provided an electrical lab for developing new products. It was there that Steinmetz developed his earliest innovations, including an electric motor for the Otis Elevator Company. General Electric offered Steinmetz considerable financial incentives if he would work for them, but he told them that his loyalty was to Eickenmeyer who had given him a chance when he first came to this country. In order to acquire Steinmetz, General Electric bought out all of the Osterheld and Eickenmeyer patents.

In 1903 Steinmetz was approached by Andrew Raymond, president of Union College. From 1902 to 1913 Steinmetz headed the School of Electrical Engineering which became one of the best in the nation under his guidance. He resigned as head of the department in 1913 but continued teaching at the school until 1923. During this period he refused to take any compensation for his work.

Since Steinmetz was not only a great inventor but also a prolific author of technical works and a teacher, it seems fitting that a website featuring technical articles on various aspects of electricity should honor him. His life and his work are worthy of careful study.

Steinmetz pictured with some of his contemporaries including Einstein, Tesla, and Marconi